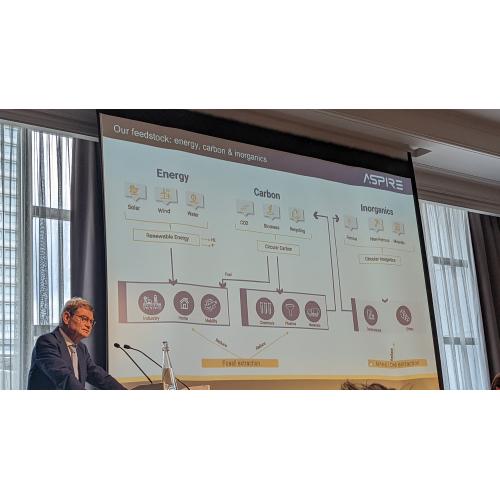 The A.SPIRE community was able to meet in person in Brussels on 9 and 10 June for the first time since the COVID pandemic. The A.SPIRE General Assembly and Processes4Planet Forum at the Double Tree by Hilton Hotel was very well attended and celebrated past achievements, reviewed current initiatives and looked forward to our next steps towards a competitive and sustainable future.

A.SPIRE Executive Director Àngels Orduña welcomed delegates to the opening session on 9 June that covered projects and hubs innovating for climate and circularity. Ludo Diels (pictured) of VITO and A.SPIRE Advisory and Programming Group (APG) Chair set the scene by outlining “What we have done and where we are going.” He reminded the audience of A.SPIRE’s story since its launch in July 2012: the 140 projects initiated under the SPIRE PPP in Horizon2020 and the A. SPIRE Vision for 2050 looking to address both sustainability and competitiveness.

“We need a tapestry of innovations to achieve climate neutrality and circularity,” he stated and emphasised the need to speed up the translation of research into real-world deployment.

Garbine Guiu Etxeberria from the European Commission DG RTD welcomed the new A.SPIRE Processes4Planet partnership and noted that its first projects were now launching. For the EU, the strategic objective is to accelerate the Green Industrial Transition with its objectives by 2030 covering climate, circularity and competitiveness. Processes4Planet is a key element in achieving these.

A panel discussion on ‘Green Investments for Accelerating the Transition’ moderated by Dorota Pawlucka of Covestro and A.SPIRE APG Vice-Chair for Competitiveness was followed by a session ‘Towards a European Community of Practice (ECOP).’ The ECOP aims to support the development and implementation of the Hubs for Circularity (H4C) concept across Europe at regional and continental levels. “Essentially we are looking to build a network of Hubs across Europe,” said Àngels Orduña.

Two new four-year CSA projects have just launched: H4C EUROPE that will focus on regions and cities and H4C ECOP that will have a focus on industrial parks and clusters. The two projects have similar visons and will work closely together.

After a short networking break the Forum split into two parallel sessions for project presentations.

The day was closed by Pierre Joris of Domo Chemicals and A.SPIRE President. He stressed the need to move “Beyond innovation work” and ensure that everything we do has “a clear path to deployment.” He also noted accelerating changes in perception from customers to finance providers with sustainability now at the top of everyone’s agenda.

The time is now

On 10 June, the A.SPIRE General Assembly was held in the morning and after lunch an Appreciation Ceremony celebrated the commitment and contributions of A.SPIRE members to the success of SPIRE and Processes4Planet partnerships. Ludo Diels and Ignacio Martin of CIRCE were presented with mementos by Pierre Joris and Àngels Orduña to highlight their significant efforts. In addition, six other A.SPIRE members were randomly selected to receive gifts on behalf of the whole community.

Àngels Orduña also announced that A.SPIRE would again be collaborating with a non-profit tree planting organisation to help plant 100 trees.

Ludo Diels then outlined elements of the work plan for 2022 and into 2023. Key features would be preparation for the SRIA update, the impact monitoring report and finalising the 2023-2024 calls.

The role of the Impact Panel was to help accelerate the impact of project outcomes by facilitating investment and deployment of technologies to support our Processes4Planet ambitions and targets.

Another significant work element would be ensuring continuing and efficient cooperation with the CleanSteel, CleanHydrogen and other relevant Partnerships.

Daniela Angione of Innopharma and Chair of the Ambassadors Group described how this group would help to ensure that Members States were aware of A.SPIRE initiatives and work to align Processes4Planet activities with the Member State R&I strategies and funding opportunities. The group had launched on 7 June with 14 Ambassadors in place and further recruitment was envisaged.

Heli Helaakoski of VTT and the APG Digitalisation Leader described the Industry 5.0 concept that recognises the power of industry to achieve societal goals beyond jobs and growth. Essentially this initiative complements the existing Industry 4.0 approach by specifically putting R&I at the service of the transition to a sustainable, human-centric and resilient European industry. A.SPIRE project SPIRE-SAIS had been cited as a best practice exemplar in recent Commission documents on Industry 5.0.

Ulrich Genschel from the European Commission DG RTD gave a briefing on the new ‘Lump Sum’ funding concept for projects. This initiative had been piloted in some projects towards the end of Horizon 2020. It is designed to reduce financial errors and had the potential to enable simplification. In Horizon Europe 27 ‘lump sum’ topics had been in calls for 2022, more could be expected for 2023.

A user perspective was given by Luis Usatorre of Tecnalia. As with all new schemes there was some uncertainty involved with working with new systems. He thought that overall, the administration workload was not necessarily reduced as internal project monitoring increased.

Pierre Joris closed proceedings by thanking everyone for their inputs to the success of the new partnership and the growing cooperation with the European Commission. He looked forward to similar fruitful cooperation with Member States.

And beyond technology development the key element was now to deploy, implement and encourage take-up of SPIRE and Processes4Planet outcomes. “Support for the right investment is key,” he concluded.